Recent visits to the Mass Audubon Wachusett Meadows and Cooks Canyon Wildlife Sanctuaries in central Massachusetts during the first week of July included the welcome sightings of a number of early summer monarch butterflies winging around the milkweed fields. Several friends and neighbors have also reported seeing them in their backyards and gardens. This is an encouraging development after the summer of 2013, when the monarch population crashed throughout the Northeast. 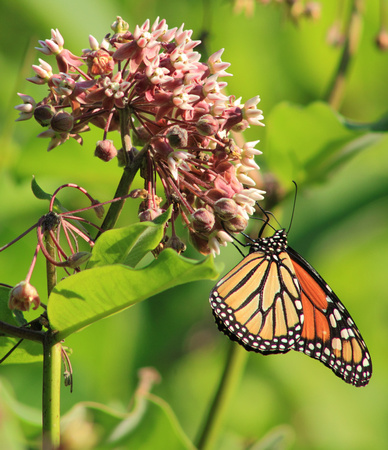 (Above: Monarch butterfly on milkweed)

Because monarchs are a well-known and highly visible species, their absence last year has generated a lot of attention. A combination of short and long-term factors was responsible for the 2013 decline. Record warmth and drought in 2012 slowed monarch reproductive activity, especially in the Midwest ‘Corn Belt,’ where a large percentage of the monarchs that overwinter in Mexico breed. This resulted in a record low number of monarchs overwintering in Mexico (only 3 acres of forest used, far below the average of 17 acres). This alone wouldn’t have resulted in the marked lack of sightings - they were fairly visible in 2012 after low numbers the previous winter. However, the spring of 2013 had more unusual weather, in this instance abnormally cool and wet conditions that adversely affected the northbound migration. Sightings were few and far between, and it was a poor breeding season.  As a result, the 2013-14 overwintering numbers plummeted to an alarming low of just 1.7 acres. 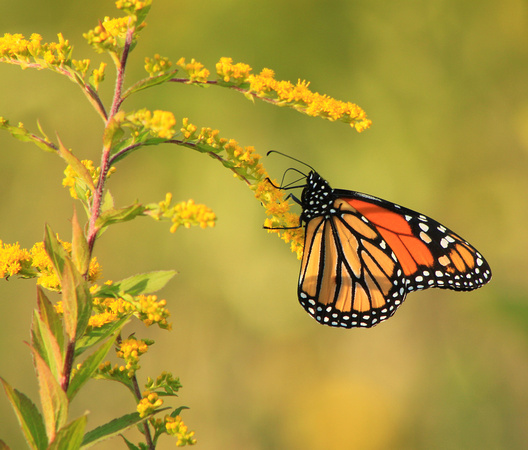 (Above: Monarch on late summer goldenrod before winter migration)

Though 2013 was an unusual year, long-term monarch population trends are troubling. A significant concern has been the loss of milkweed, their sole host plant. Studies indicate that milkweed has declined by more than 20 percent over the past two decades, effectively eliminating nearly one-quarter of monarch breeding habitat. Milkweed is most common in Midwestern farmlands, where it was been reduced by recent agricultural practices, such as genetically modified crops that facilitate the removal of milkweed and other species that are regarded as unproductive weeds by farmers. The loss of former fields to forest regrowth and suburban development in recent decades is also a factor. In additional to its value to monarchs, milkweed is a key food source for many other butterflies and insects. Visit a milkweed patch now (mid-late July) and you'll often see masses of fritillary, tiger swallowtails, silver-spotted skippers, milkweed bugs, and other insects congregating around the blooms. 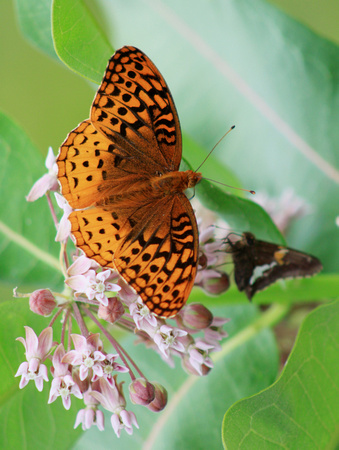 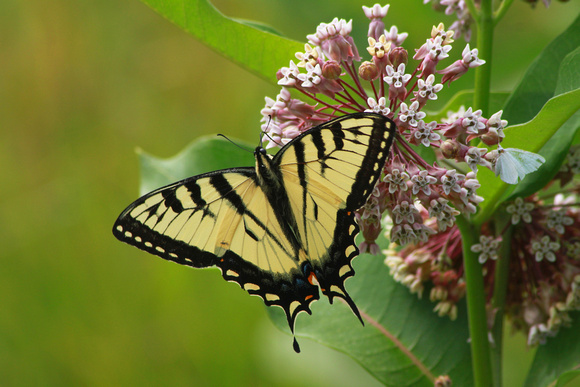 (Above: Silver fritillary (top) and tiger swallowtail on milkweed)

To briefly summarize the unique life history of monarchs, after 3-5 generations cycle through during the summer months, one long-lived generation undertakes the long migration to warm wintering grounds in Mexico and California in the late summer and autumn. In June, the next generations make the journey north to breeding grounds, and then the cycle begins again. Given the geographic spread, susceptibility to weather, and numerous other factors, conservation is a complex challenge. Though the long-term trends indicate recovery will be a long process, hopefully the early sightings of 2014 are a positive sign.