The recent return of great white sharks to Massachusetts coastal waters has been an interesting and highly publicized development. I've been gathering information related to shark sightings, gray seals, and related habitats such as Monomoy Island and the National Seashore ocean beaches. Here's a timeline of key events: 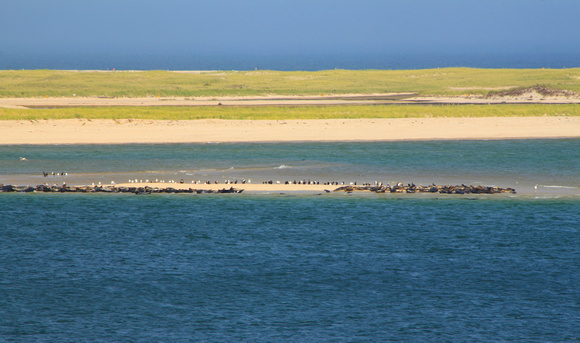 (Above: Gray seal colony off Lighthouse Beach near Chatham Harbor's inlet, a hotspot of shark activity).

Late 19th century - 1962: Massachusetts enacts bounty on seals, which are hunted to near extinction in New England.

1936: A fatal attack on a swimmer off Mattapoisett is the last great white shark attack in Massachusetts until 2012.

1990: A single great white is seen off Cape Cod, the only sighting for 5 years.

2004 September: A great white is entrapped in a shallow lagoon on Naushon Island for several days.

July 15: A dead small female great white washes up on the southwest shores of Nantucket Island.

2009: A large gray seal colony well-established at Head of the Meadow Beach in Truro, later shifts north to the High Head area.

2012 July 9: a first-time sea kayaker is pursued by a shark off Nauset Beach, witnessed by many beach visitors.

July 30: A 50-year old man is bitten in ocean waters while swimming with his son roughly 500 feet off Ballston Beach in Truro. 50 stitches are required to close the wound, which is confirmed as a great white.

July-September: Ocean beaches in Chatham and Orleans repeatedly closed and reopened after sightings.

September 13: A giant 20-foot female is one of 6 great whites tagged off Chatham by Shark Hunters.

August 25: A great white is spotted by police helicopter off Duxbury Beach, resulting in swimming closure; it lingers off the beach for more than an hour.

September 3: A great white overturns two female kayakers off White Horse Beach near Plymouth and bites one of the boats. The women are rescued without injury.