Unusual weather has been the norm over the past year, and the effects of the recent summery temperatures are apparent even on the ridge of the Presidential Range and Mount Washington in New Hampshire's White Mountains, where considerable snowmelt looks well out of place for March. Last weekend, the "snow bowl" of Tuckerman's Ravine was active with skiiers and snowboarders, who enjoyed record-breaking warmth while braving the steep slopes of the headwall. In fact, the waterfall atop the headwall was open and flowing, weeks ahead of schedule.

The ravine, which is a cirque carved by alpine glaciers below Mount Washington's summit, can receive as much as 55 feet of snow in one winter. The first known skiier was in 1914, and during the 1930s it hosted a variety of events including giant slalom races, Olympic tryouts, and three summit-to-base races known as the 'American Infernoes.' Today, it is a very popular destination for winter recreation, especially in late winter and spring - the season can continue as late as June.

The base of the ravine is reached by a 2.4-mile hike that gains roughly 1850 feet from the trailhead at the Appalachian Mountain Club Pinkham Notch visitor center on Route 16 between North Conway and Gorham. While the climb is almost constantly moderate, there are no real steep sections, and the footing is usually good on the well-packed trail. It's a fine winter hike for those who wish to explore an interesting area of Mount Washington without going all the way to the steep, exposed summit, though all visitors should check signs and advisories regarding avalanches - some trails and places such as the 'Lunch Rocks' may be dangerous.

(UPDATE ADDED 4/4: Sadly, shortly after this was published, there was another fatality involving a hiker from Massachusetts who fell down an icy slope of the ravine after climbing to the summit, as detailed here: http://www.unionleader.com/article/20120110/NEWS07/120119994&source=RSS

In this image a snowboarder passes by the right of the open waterfall on March 18, 2012, on a day the summit broke the previous high temperature by more than 10 degrees! More pictures may be viewed here: http://johnburk.zenfolio.com/?q=%22mount%20washington%22 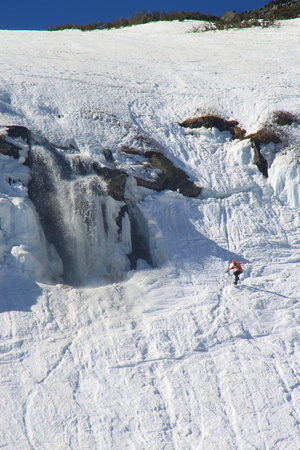