On a recent trip to the Maine coast I caught the famous Nubble Lighthouse as a powerful coastal storm cleared southern Maine at sunset. The wild evening including a double rainbow, crashing surf, and sustained fierce wind - in fact gusts of more than 70 miles per hour were recorded by the National Weather Service.

The 'Nubble' draws its name from the tiny island it sits atop, which is a short distance offshore from the mainland coast near York Beach. It owes its popularity to easily accessible views from Sohier Park, a waterfront park that encompasses the slab of rocky shore at the tip of Cape Neddick, and its proximity to the York beaches. Photographers and artists enjoy a variety of lighting conditions throughout the day, from spectacular sunrises in the morning to golden evening backlighting.

Though Nubble Island was visited by explorer Bartholomew Gosnold as early as 1602, in spite of pleas from many mariners to mark a safe passage along these rocky shores, the lighthouse wasn’t authorized until 1876. The 41-foot tower began operations three years later bearing a dark red coat of paint. It was repainted in its familiar white in 1902, the same year the photogenic red oil shack was erected near the lighthouse. After more than a century’s worth of management by keepers, some of who kept farm animals on the island, the light was automated in 1987.

The Nubble Lighthouse had a most unusual distinction in 1977 when it was included in a series of photographs and artifacts that were loaded the Voyager II rocket during its mission to photograph the solar system. These items, which also depicted landmarks such as the Great Wall of China were to educate potential extraterrestrials about Earth. In some winters, migrating snowy owls may take up residence on the island – watch for them perched on the lighthouse buildings and on the telephone poles.

The reward for braving the elements included the rainbow, shown below. It's always great to find unusual conditions at familiar viewpoints! 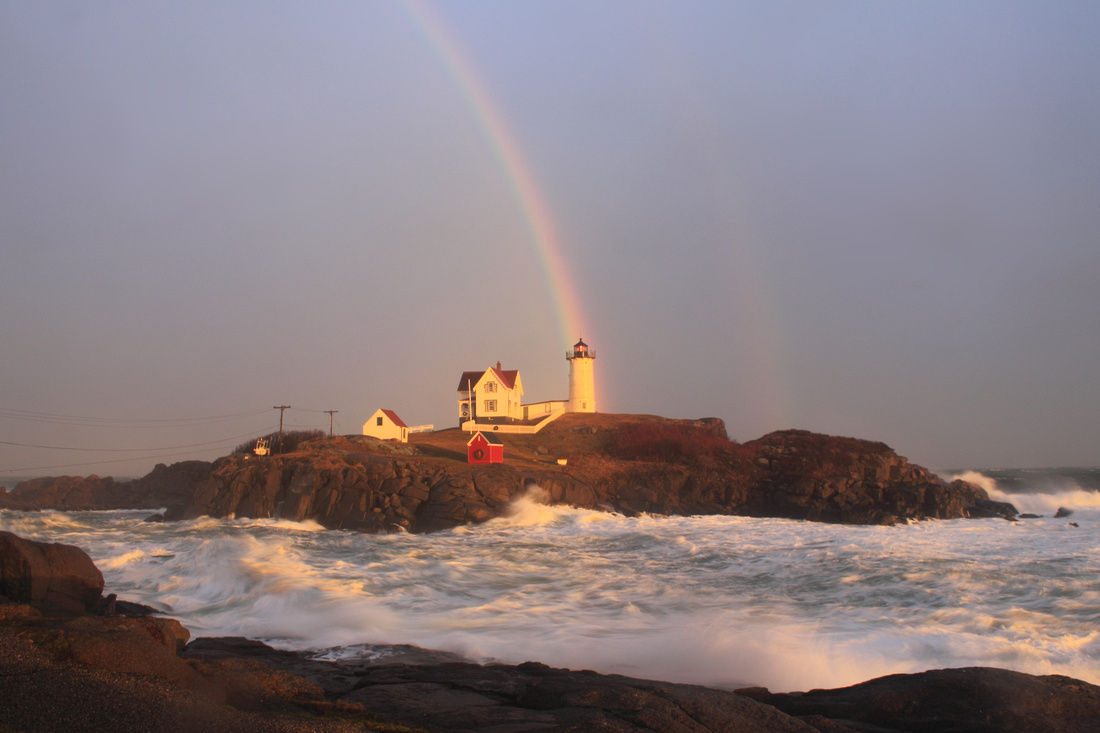